For this year's tournament my brother Gus wanted to field the army of Lancre, based on Terry Pratchett's Discworld books - highly recommended reading for all HOTT players, although not to everyone's taste.

As he unfortunately suffers quite severely from MS it fell to me to construct the army.After studying the sources - primarily Wyrd Sisters, Lords and Ladies and Carpe Jugulum - we decided on:

Here are some pictures: 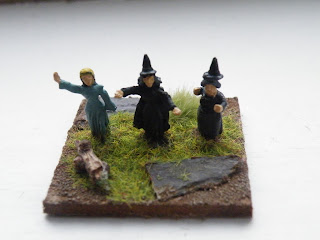 The three Witches: Magrat and Granny are from Magister Militum. Nanny Ogg is a Two Dragons Dark Age villager figure with the hat from another Magister Militum witch. It has subsequently been removed so that I can fit it on straight! 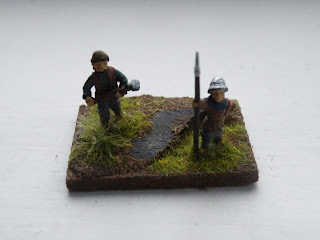 The Ogg boys: Jason is also a Two Dragons Dark Age villager. Shawn is an old Essex figure I think. As Shawn is notably short and Jason is on the large side, being a blacksmith, I raised Jason's side of the base to give him the impression of height. 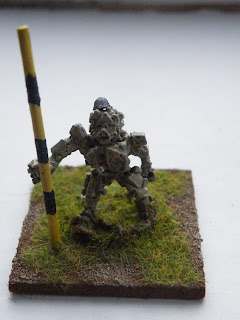 I think it works really well. As per his cameo in Carpe Jugulum he holds a yellow and black striped barrier pole and wears an old helmet that is far too small for him. Thanks Paul. 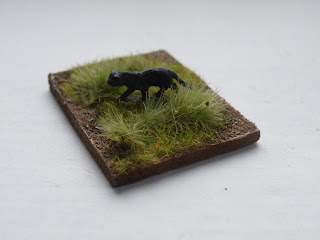 Greebo: This is an old 25mm Ral Partha familiar.  Again, I like the way it has turned out. However, I'm not sure that a Lurker really does Greebo justice. Perhaps a beast or even a behemoth would have been better. 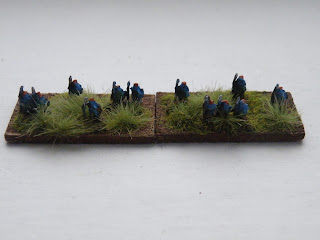 The Nac Mac Feegle, or Pictsies: These are Irregular Miniatures 6mm Picts, although I could have used any similar figures. 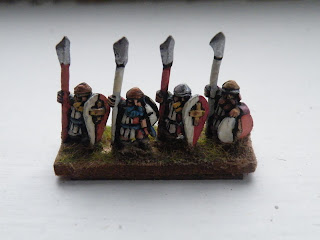 Copperhead Dwarfs: Although they don't really figure in the stories, they are mentioned so we took them to add a bit of variety. These are Peter Pig dwarfs that I bought on eBay. I plan to replace them with some 15mm Asgard/Tabletop dwarfs that I have. 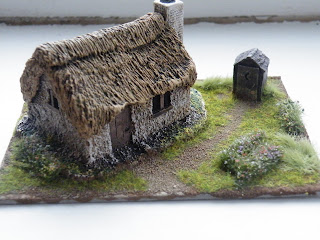 Granny's cottage: The cottage itself is another eBay purchase, the privy is from Peter Pig. The 'herbs' are from the minNatur range miniNatur. The tussock on the bases are also from this range which I highly recommend. I've still to add a pen and some goats.

The army perfomed well, without being a killer. Gus felt there were too many hordes so I have since added another two Pictsie warband elements. I plan to convert a Magister Militum wizard into Mustrum Ridcully, complete with crossbow. I might convert Ponder Stibbons to join him. This could be a shooter, magician or possibly a lurker. At the moment I'm thinking shooter, given Mustrum's down to earth huntin', shootin' and fishin' personality.

Other future alternatives will include the witches on their broomsticks as flyers, Greebo in human form as a(n anti-)hero and the Librarian, if I can track down a 15mm Orang Utang. Possible sources and suggestions for what element type he should be are welcomed.

For the last five years I've run a 15mm scale Hordes of the Things Tournament at the start of the year, designed to start things off after the Christmas and New Year break. The tournament uses a round-robin format with the aim of playing three rounds of games. The pairings for the initial games are drawn randomly before the tournament starts, each subsequent round will match the winners from the previous round against each other and the losers against each other. If two competitors have already played, then the match-up is re-drawn. The games are played using the 2nd edition of the rules with the following two amendments:

The tournament is not themed, so players can bring any legal army they wish. Games are played with 24AP armies, which must be legal according to the rules. The same army composition is used for each game.

We use 24” by 24” boards, without pre-set terrain. Scoring is on the basis of: Win – 3 points Draw – 1 point Lose – 0 points Total enemy AP destroyed is used to break ties at the end of the tournament – the player who has killed the most enemy AP wins. If that still leaves a tie, most generals killed followed by most stronghold captured will be used. In the unlikely event of a tie still not being resolved, a play off will be held between the tied players.

Prizes are offered - a painted HOTT army for the winner, plus smaller prizes for the best stronghold and for the best army (both voted for by the competitors). Some years additional prizes have been on offer, for example to the highest placed novice or the best performance with a borrowed army.

The tournament has been well supported by the club members with between 14 and 16 players most years. The maximum number was 20 in 2009. Over the years a number of new armies have been created to enter in the tournament.

Here are photos of some of this year's armies 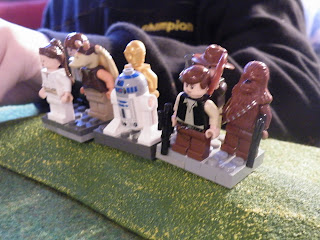 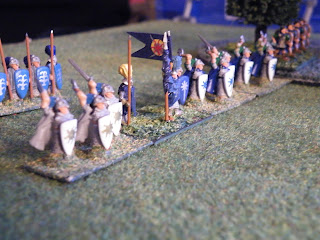 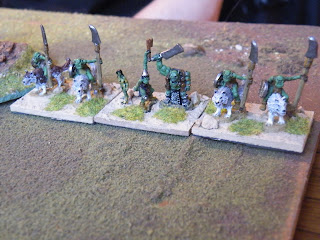 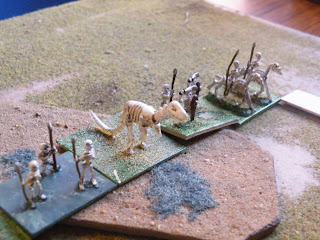 One of several Undead armies on show. 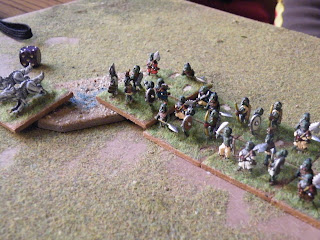 Another Goblin army, this was the first prize in 2010. 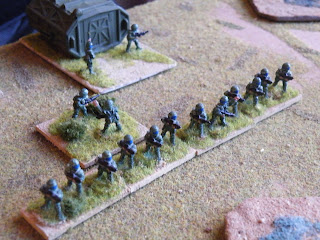 Last year's first prize, a Sci-Fi army. It was awarded to the best placed player using a borrowed army. 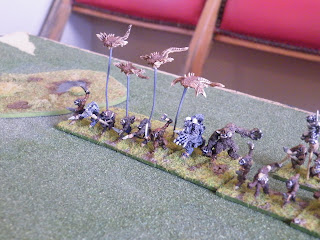 A fantastic Beastman army. It was last year's prize (in bare metal) for the best army. 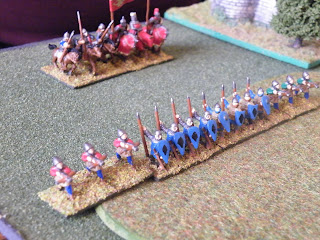 A Nemedian army, from the Conan stories. 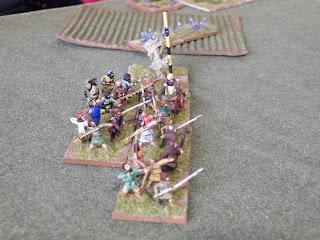 The army of Lancre, from the Disc World books. 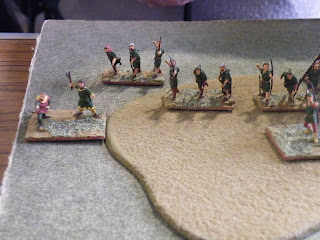 Robin Hood and his Merry Men.
Posted by Phoenix Wargamers at 16:53 No comments:

Phoenix Wargamers
The Phoenix is a combined user for members of the Phoenix wargaming club in Glasgow, who play wargames. We blog on games we feel are worth sharing.